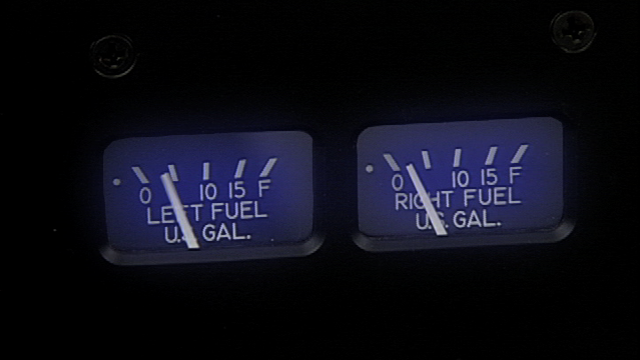 Being that it was such a hot desert summer night, temperatures were still in the 90's I believe. The climb out was slow and I kept the mixture very rich to keep the oil temperature in check, which was already at the high end of the spectrum. I burned a lot of gas on that climb.

As I approached Palm Springs and the Banning Pass it was very clear to me that fuel levels were getting quite low. At this point it was probably after 1am. I considered diverting to KPSP but being a kid with very little cash and only a Chevron gas card, I looked the airport up in my AFD only to find it did not have a Chevron gas station on the field. It was late, I was getting tired, and I just wanted to get home, so I pressed on. As a precaution, I maintained a higher altitude than I normally would, and I stayed over major freeways to give myself time and a way out if the worst should happen.

I approached Corona in the most direct way possible. I did not overfly the field and enter a regular traffic pattern, instead opting for a straight-in. Once I felt I had the airport made, I started a steep descent to get down from my unusually high altitude. Although the power was back to idle, at about a mile final I noticed a subtle difference in the sound and feel of things and I was sure the fuel was exhausted. My passenger didn't even notice it, so I pushed the throttle back in to prove my theory, only to receive no response.

I greased that dead-stick landing, coasted off the runway, and we pushed the plane back to its parking spot under the cover of darkness. I peeked into the tanks after tying down the aircraft and it was not a pretty sight.

This was a never-again experience. There were multiple contributing factors at play, but at the end of the day I think it comes down to me allowing myself to be pressured into a situation I was not comfortable with, combined with a case of get-home-itis.

I hope you enjoyed the story and took something away from it!